Editor’s Note:  This article was originally published on the Global Solutions Foundation website and Young Global Changers blog and can be found here.

In a time when a virus, with less than 125 nm in diameter, is spreading across the globe, it could be easy to feel helpless and disconnected. Instead, we chose to feel how deeply interconnected we are and how small things can have a massive impact. Massive positive impact, that is. These seemingly dire circumstances proved to us that no person is an island and that one young changemaker or even a small group of them can also have a global impact of considerable value. Here’s our story.

The Story Behind the Study

Two months into lockdown, Yelena Novikova, Young Global Changer 2017 shares an article she wrote about transparency and accountability in times of COVID19 in Kazakhstan. 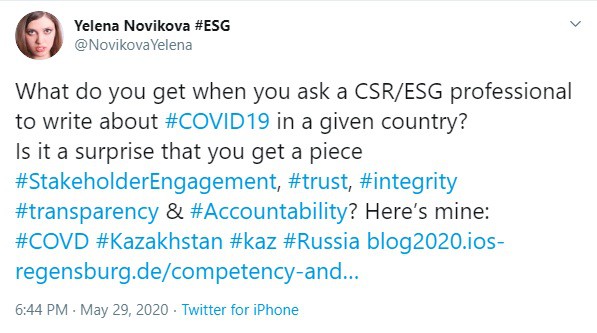 This started a brief exchange of opinions and thoughts on Twitter with Alexandra Kodjabachi, another Young Global Changer 2017. 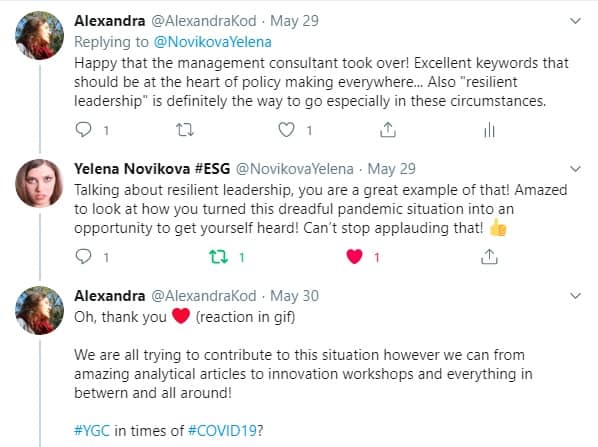 But the exchange led to an unexpected outcome: the two came together to explore what could potentially lie behind this “YGC in times of crisis” phenomenon. 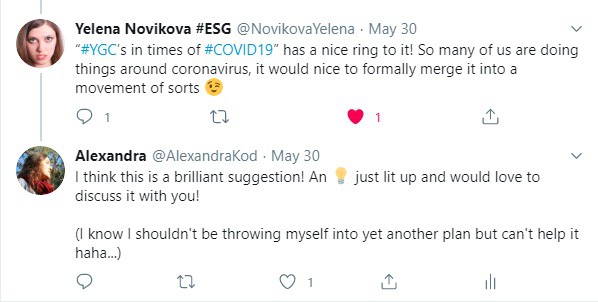 Millions of cases and deaths later, as the pandemic spread like wildfire, we come to realize that the efforts made to fight the virus need to be at least as connected and fast to spread.

We know and feel the impact COVID-19 had on our lives. But what impact did we have on the pandemic? More specifically, how did we contribute to improving the state of things? What can the coming together of change-makers from different parts of the world do for people in times like these?

And so our Journey Began

Back in May 2020, these questions led us to start a case study and explore the capabilities and impact of young individuals, scattered across the globe, disconnected from each other, three years after a conference that united them in Berlin at the Think 20 for the G20 Global Solutions Summit.

We tried to reach out to as many of the 101 Young Global Changers of 2017. 9% were completely out of reach and only 66% were still members of a communication group. Eventually, 9% of the YGC community participated in our survey.

This percentage does not seem like a successful engagement rate. However, the infographic below shows what 9% of 101 were able to do in less than 3 months.

Limitations of the Limitless

While our YGCs seem to be limitless in passion and ambition, our case study has practical limitations. It covers the early mobilization stage of COVID-related effort that took place within the first months of the global pandemic. While we officially stopped accepting responses to the survey as early as the 29th of June, 2020, we know that our YGCs keep multiplying the impressive figures and achievements they shared with us back in June.

The Power of 9 in Figures

In just about three months of global lockdown, nine Young Global Changers positively affected the lives of more than 16,600 people from all over the world, a ratio of 1 : 1,844, thus proving how the critical few can channel energy, resources and know-how to impact the world. Although Young Global Changers are known for their engagement across sectors, we had to explore the overlapping space between the cohort’s expertise and areas of optimal relevance to the fight against COVID-19, which brought us to study their involvement across five fields: research, education, volunteering and fundraising, corporate action and social media awareness. Here are a few numbers that express the extent of the YGCs impact. 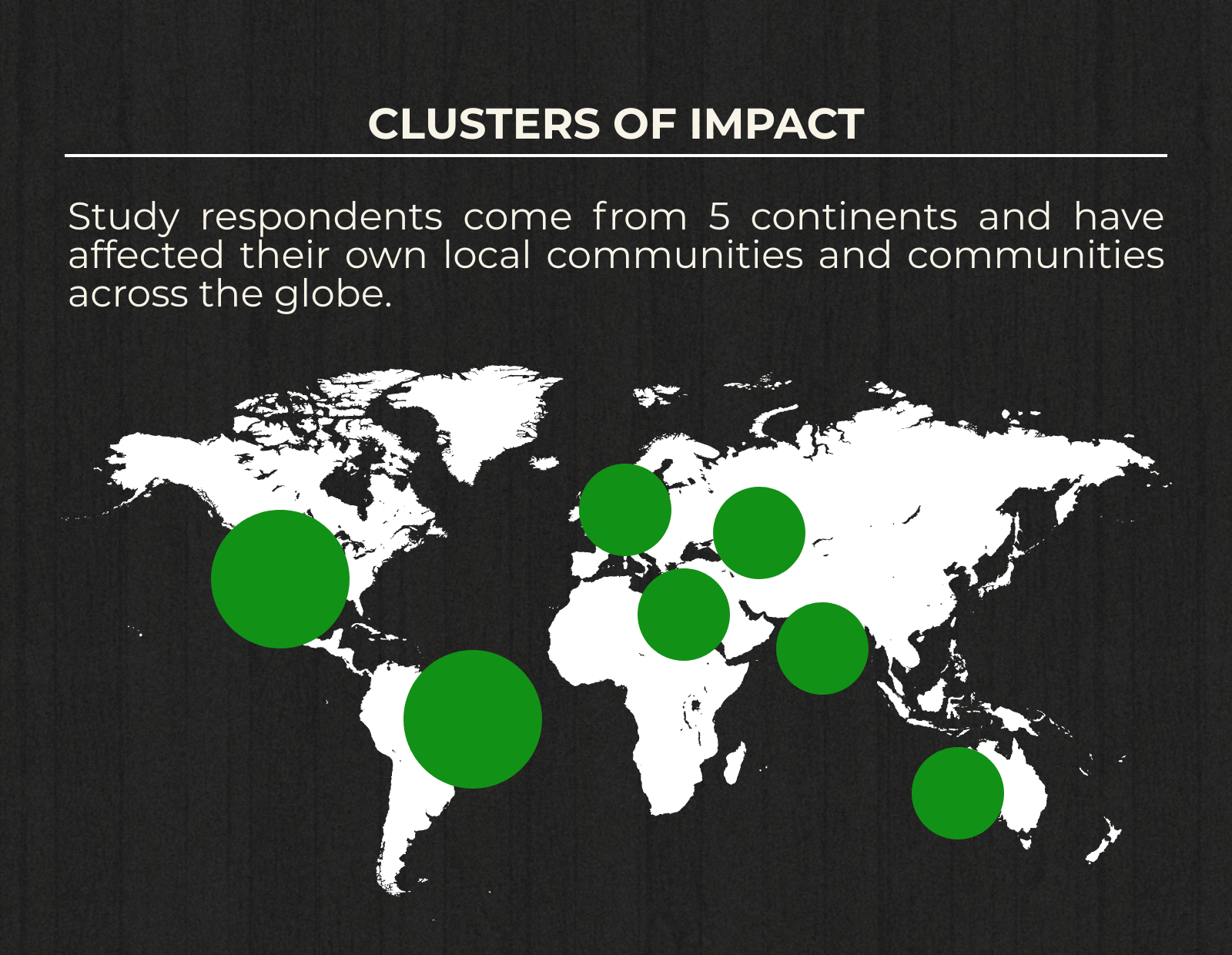 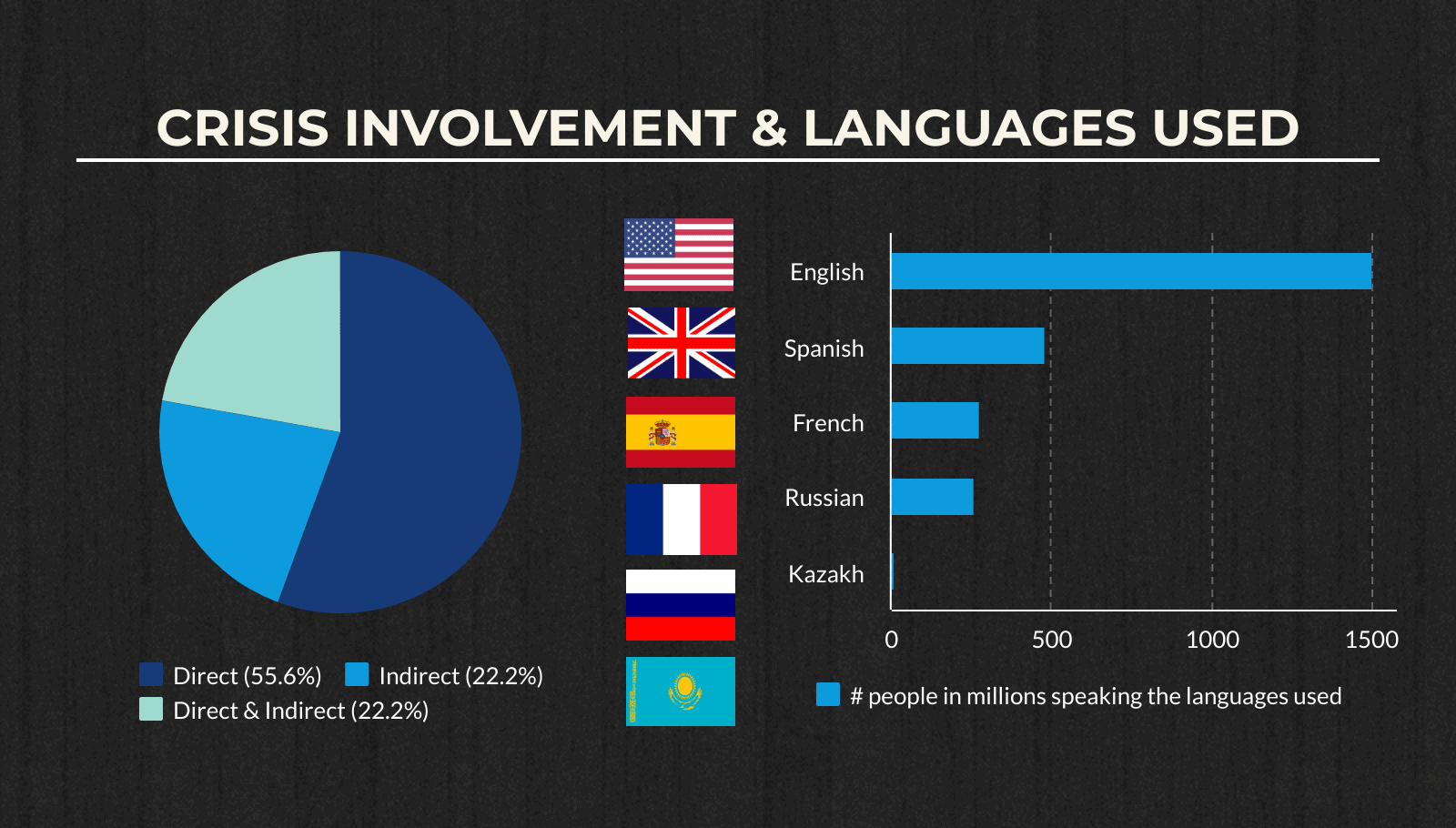 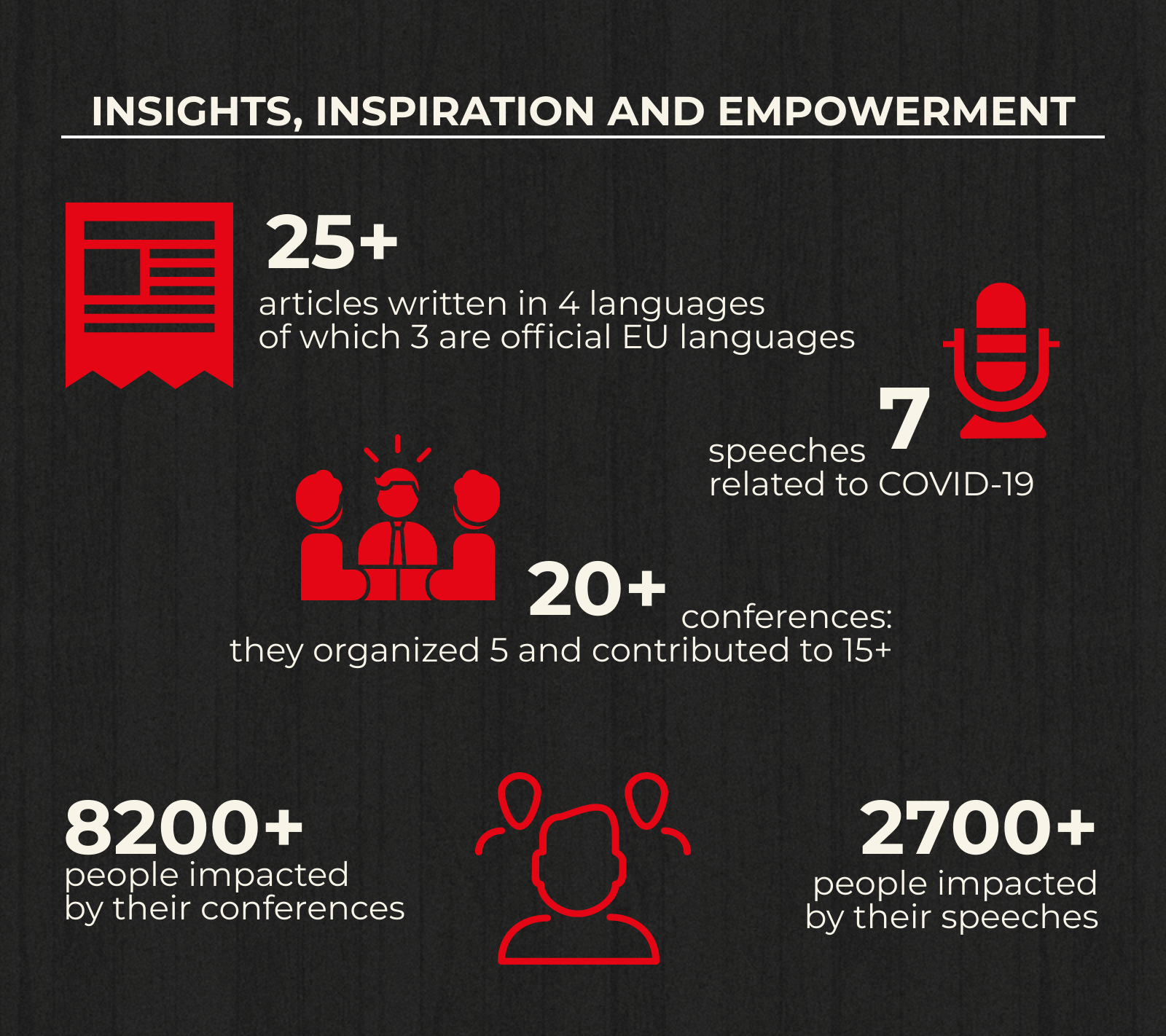 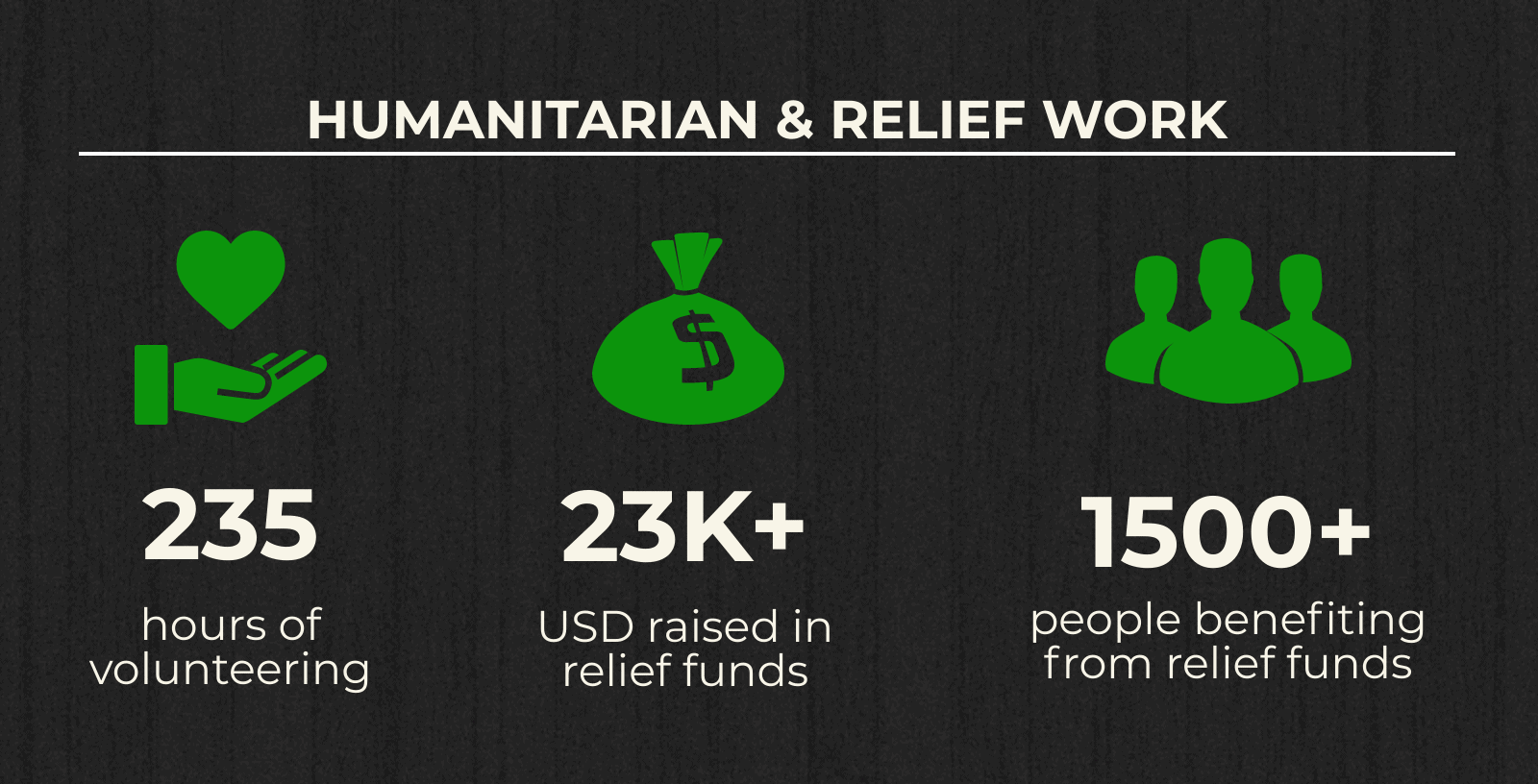 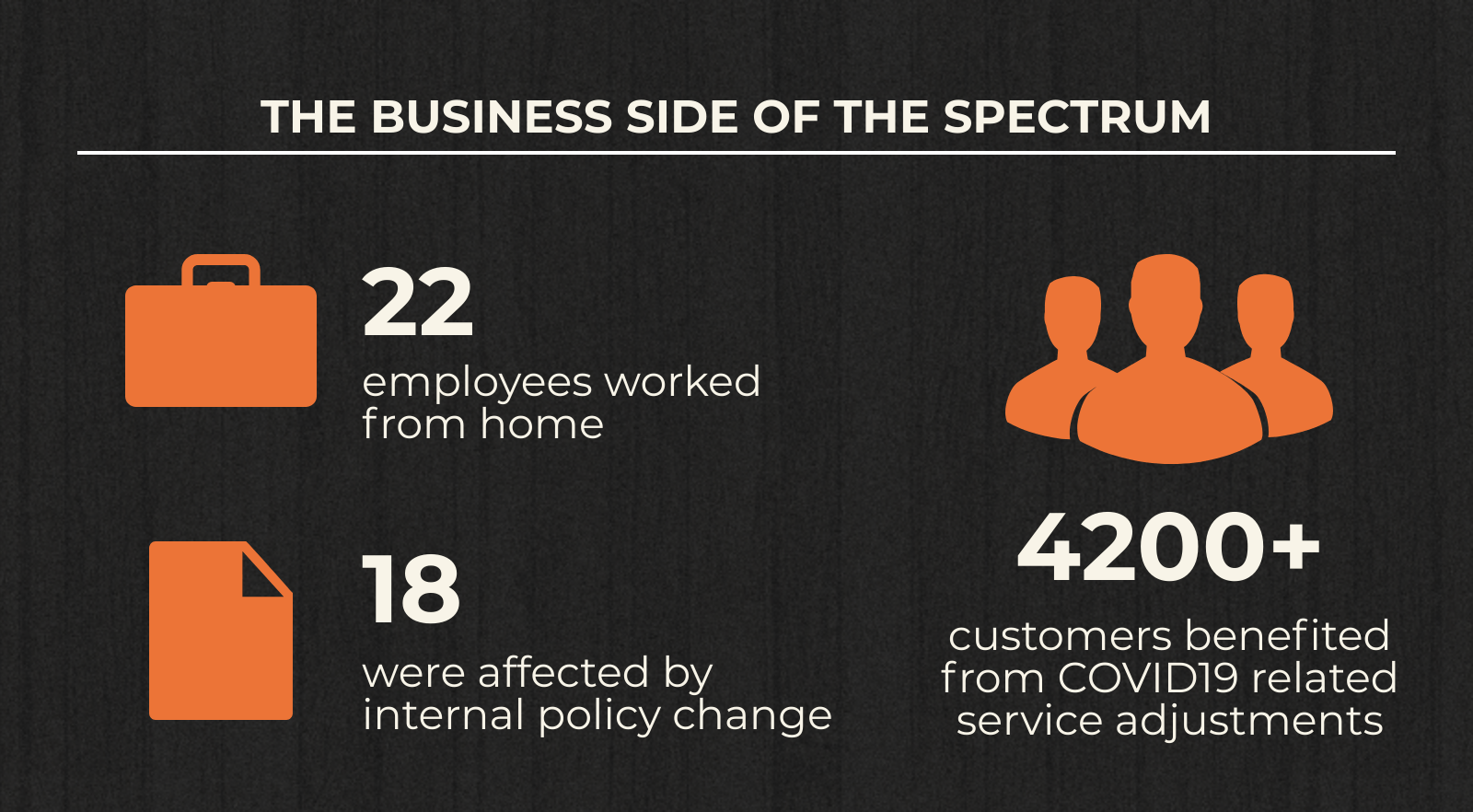 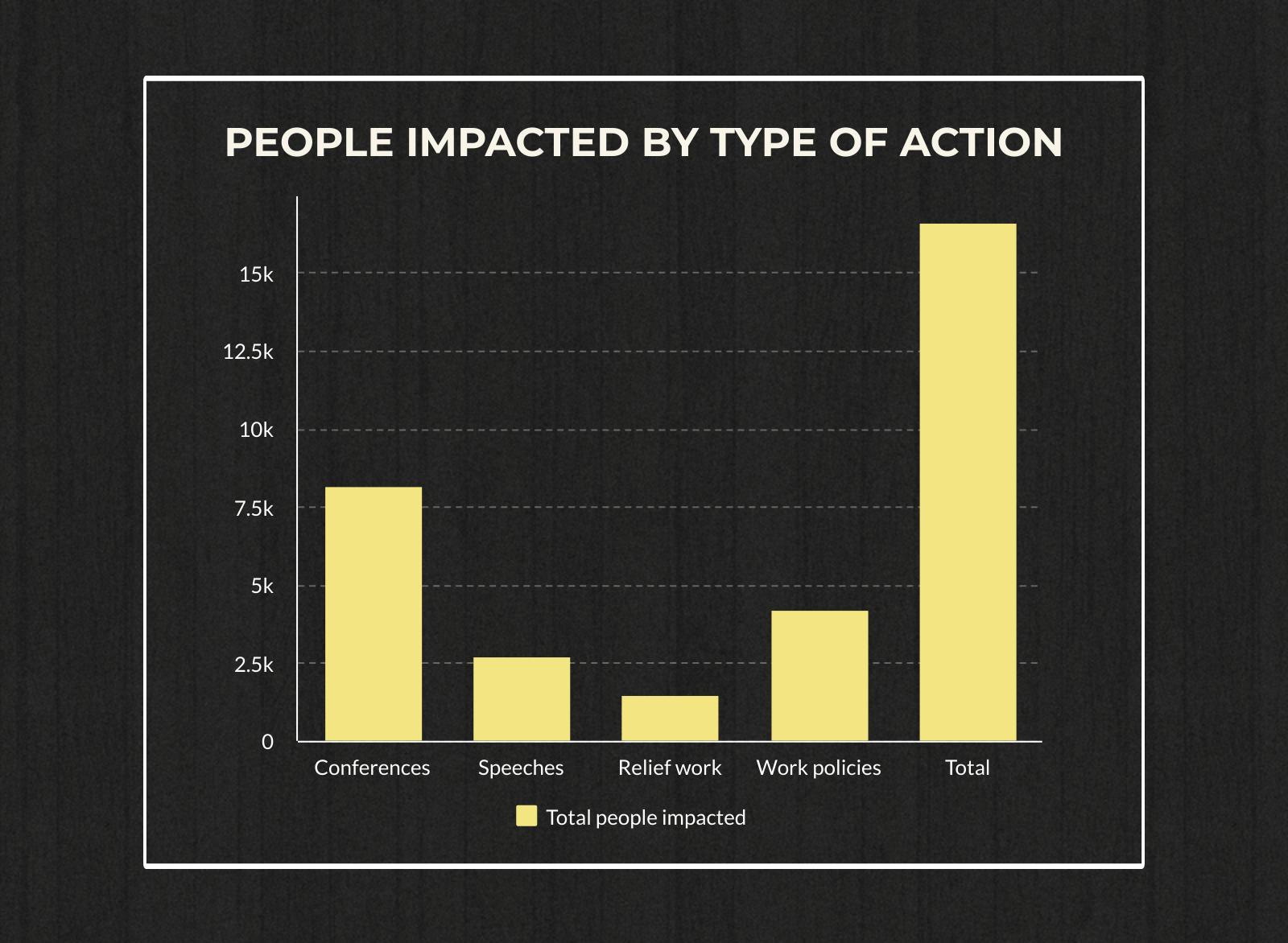 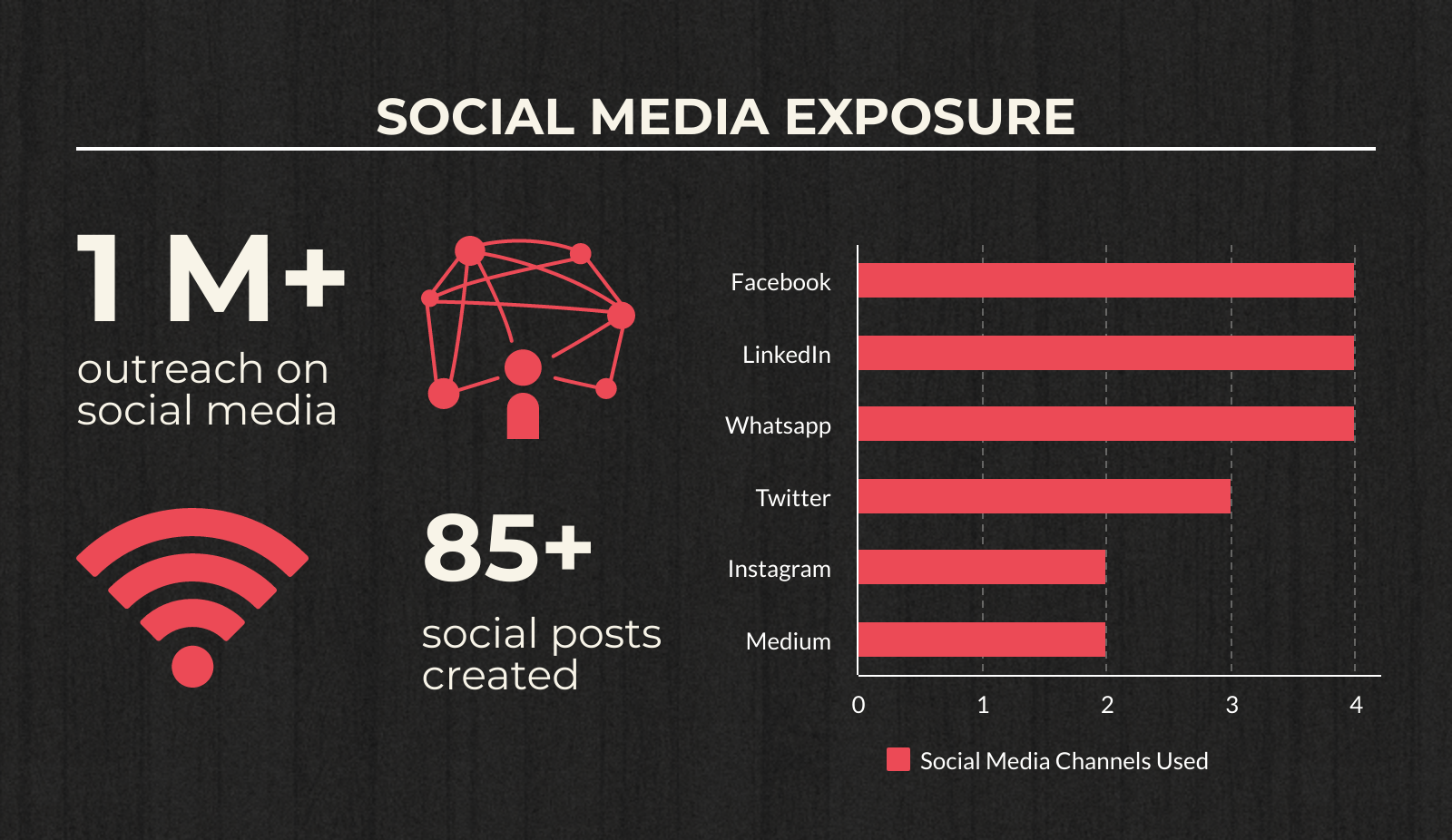 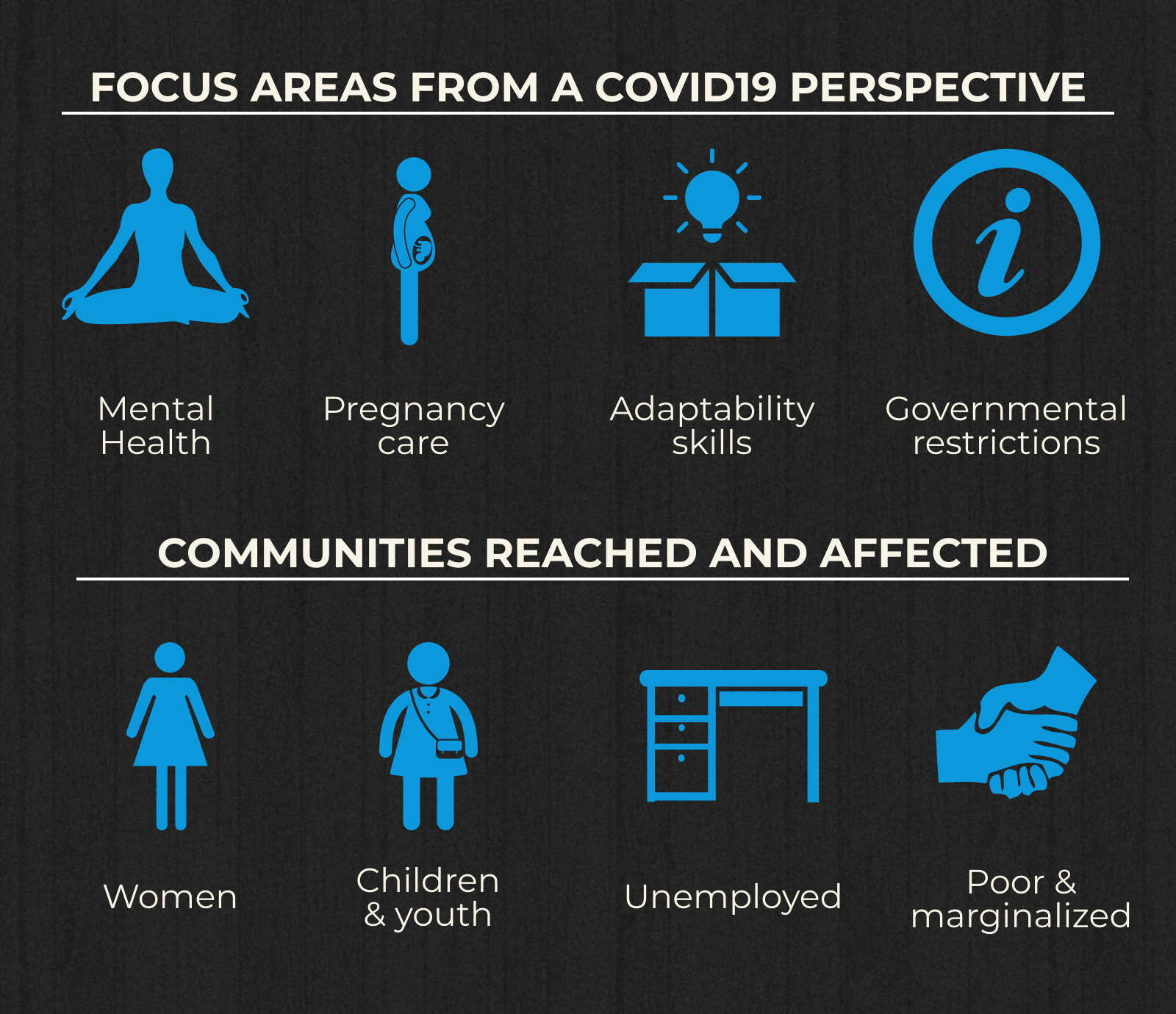 A lot of words have been thrown around in connection to the ongoing COVID-19 pandemic: anti-fragility, resilience, agility. Some even go as far as claiming that this virus has localized and deglobalized the world. Nevertheless, it remains very true, that “individuals can play a powerful role in driving positive change.” The will and power to drive change, can start with a “critical few” (see Jon Katzenbach et al (2018): The Critical Few). Yet, “the critical few” doesn’t merely refer to a critical group of people, driven to contribute to change.

Crucially, it also refers to “the critical few” traits, behaviors and emotions “…narrowed down for the purpose of having the most impact… within the shortest possible period of time”.  In fact, as Robert Moritz writes in his “Foreword” to the aforementioned book, “The key… is to start small: you don’t need a hundred ideas about who you are but a very narrowly focused group”.  We literally “went by the book” here (without necessarily realizing that): the Young Global Changers community is essentially defined by one narrowly focused idea of bringing about change. Wherever, whenever or whoever we can bring it to, with whatever resources we have available to make said change happen.

While nine people in our tight-knit community couldn’t sufficiently make up a reliable sample due to its negligible size, this seemingly tiny group was able to prove something far more meaningful…

TAKEAWAY 1: UNITED, WE STAND
Even divided by closed borders, isolated by lockdowns, and separated by time (lest not forget it’s been over three years since we last saw each other), we are still united in our shared aspiration to not be bystanders. Whether we did it together or separately, we were, knowingly or unknowingly, connected by our desire to fight our common enemies – the pandemic and the crisis associated with it.

TAKEAWAY 2: NOTHING CAN STOP US
Challenges pave the way. As YGC tried to implement their solutions and contribute to the post-Covid era, they ran into several obstacles, from managing projects in rural areas to running workshops in parallel with power cuts to trying to publish on Medium when the medium is nationally inaccessible. Still, they managed to get themselves heard and to impact lives locally, nationally and internationally.

TAKEAWAY 3: IT’S OUR DRIVE THAT DEFINES US
We are not defined by what we do, we are defined by our drive to do something. It’s common for changemaker communities to get organized by the type of work that one does. Turns out, you can’t divide change into categories, as you face a common enemy.
Are you an activist, an entrepreneur, a charity worker, a researcher, or a government employee? Do you work to stop climate change, educate communities, integrate refugees into society, or ensure people’s access to healthcare? The questions that once existed to describe one’s contribution all morphed into one: What skills can you offer in this crisis?

The Role of Authentic Informal Changers

Going back to the aforementioned “critical few”,  the concept of the so-called AILs or “Authentic Informal Leaders” is central to Jon Katzenbach’s (loc.cit.) view of culture-led transformation: “People, who influence and energize others without relying on their title or formal position in the hierarchy to do so”.

Young Global Changers don’t rely on formal positions within the hierarchy to affect change. Yet, so many are  “…the informal leaders who “see it” (recognize the value of change), “get it” (understand the reasons), “want it” (are committed to change), and… already “breathe it.” (Ibid, p. 96) More importantly, most of them do believe in the power of positive keystone behaviors and good acts “going viral” by replicating in behaviors of others.

A Message of Hope

We sincerely hope that some of the numbers you see in the infographics above can prove to anyone with a drive, that the biggest asset to make an impact right now is determination. The expertise that you already have, versatile as it is, can make an impact greater than you could ever imagine. When you put your skin in the game and your knowledge and skills in the intersecting lines of problem-solving, you can come up with innovative ways and ambitious results even in the most unexpected circumstances and beyond your circle of normal activity. Remember, you’re bigger than a virus with 125 nm in diameter.

Alexandra is the Founder and CEO of PersEd, a talent development enterprise for personal education, featuring 21st century skills and mindset transformation, and empowering lifelong learners and professionals to be who they are and all they can become. She’s also is an international public speaker, consultant, coach and author; and recipient of the Alain Decaux Literary Prize for the Francophone world. Alexandra has been recognized as a MENA Leadership Academy fellow (2016-2017), G20 Young Global Changer (2017) and UNESCO APCEIU Youth Leader (2019), as well as at Unleash Global Talent (2018). As a connection creator, she’s always exploring the breadth and depth of multidisciplinarity, and putting connections at the service of creativity, performance, collaboration and foresight to reinvent the ways in which we think, learn, work and live. Yelena is an independent expert, contributor and public speaker, whose work has been recognized by the G20 Global Solutions Initiative, as a G20 Young Global Changer in 2017 and 20118. She co-paneled a discussion alongside Emmy-nominated BBC2's Phillippe Cousteau Jr & Egyptian Minister of Water & Irrigation Dr. Mohammed el Aati. Yelena is a graduate of the Grenoble Graduate School of Business, London Metropolitan University and KIMEP. In 2017, she was featured as 1 of 7 of London Met’s most inspirational graduates, alongside London mayor Sadiq Khan. In September 2018, her short article for "Global Solutions Journal" was published alongside contributions by German Chancellor Angela Merkel and Nobel Laureate Edmund Phelps, and in December 2019, her article on post-normal bonds was named "The Best Paper of the Year-2019" and later published by the London-based "Chartered Institute for Securities and Investment.