This article was first published by the Environmental Defense Fund, an organization focusing on creating economical policies to support clean air and water; abundant fish and wildlife; and a stable climate. The article was authored by Ilissa Ocko and originally appeared here.

While you might enjoy warmer winter days that feel more like spring, those breaks from cooler temperatures are no reason to celebrate.

Our changing climate is transforming winter in some alarming ways:

We are seeing the results of global warming the most during winter, as it is the fastest-warming season in 38 U.S. states. In the Northeast, winter has warmed three times faster than summer in recent decades.

Northern winters have heated up the most, with more than 5 degrees Fahrenheit of warming in Alaska, Minnesota, Vermont and Wisconsin since 1970.

Warming rates are often greater at higher latitudes partly because of a decrease in snow cover, which exposes darker land surfaces that absorb more sunlight. 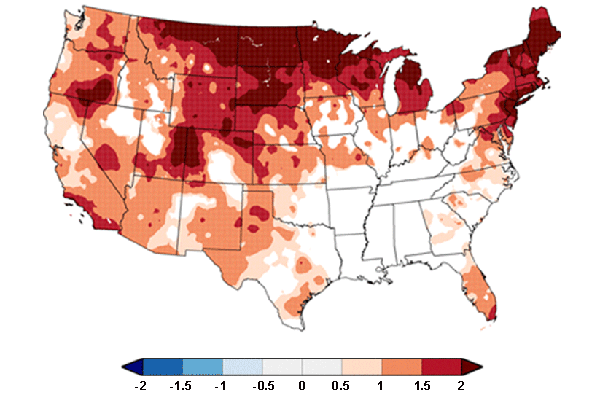 This map shows warming winter temperatures in the U.S. from 1895-2017, in degrees Fahrenheit per century. Source: NOAA Climate.gov

Warmer winter weather can be devastating to crops and plants when they lack the cooler weather they need to chill — an important life stage that, if absent, can lead to less fruit production and weakened plants that are more vulnerable to pests.

These plants also can bloom too early, before migrating pollinators arrive and the last freeze happens.

2. Cold streaks are shorter and rarer

Consecutive days of colder-than-average temperatures — which can be several weeks long — have gotten shorter in hundreds of major cities in the U.S. since the 1970s, with dozens seeing cold streaks shorten by about a week.

An “average” winter or “typical” cold streak feels colder to us now, because we are used to the warmer temperatures.

And there is evidence that strong warming in the Arctic — two times the rate of the rest of the world — can weaken the jet stream, allowing for frigid polar air to penetrate farther south than normal on occasion.

Because of warmer air temperatures, every region of the U.S. has seen a decrease in the amount of precipitation falling as snow over the past 65 years. In Oregon, for example, nearly 90% of weather stations have been getting more rain during that time.

A recent analysis found: Over the past 80 years, there has been a significant decrease in the frequency of years with a large number of snowfall days in the southern United States and the Pacific Northwest.

Less snow is particularly disappointing for winter sports fanatics and the tourism industry.

Recreational activities such as skiing, snowboarding and snowmobiling have been impacted by low snow years, with an average loss of 17,400 jobs and more than $1 billion.

4. When it does snow, there’s much more of it

When temperatures do get below freezing, we actually expect more snow to fall during storms. This may seem counterintuitive, but a warmer planet is evaporating more water into the atmosphere.

That added moisture means more precipitation in the form of heavy snowfall or downpours — depending on the temperature that day when the precipitation falls.

During warmer months, this can cause record-breaking floods. But during the winter — when our part of the world is tipped away from the sun — temperatures drop. Instead of downpours, we can get massive winter storms.

While the average amount of snow is declining in many areas in the U.S., the amount of snow that falls during a storm is increasing. More than 40% of counties in the country have had their biggest two-day snow totals since 1980.

Less snow has led to a decline in the amount of snow covering North America, and warmer weather has caused the snowpack — especially in the West — to melt weeks earlier than in the 1960s.

The declining snowpack and earlier snowmelt reduce streamflow, affecting crucial freshwater supply for agricultural, residential and commercial purposes. It also increases the potential for wildfires due to decreases in moisture.

Unless we take immediate action to curb climate pollution, we will experience further warming and worsening impacts.

The good news is that because we know what the cause is, we also know what is needed to stabilize our planet. We must come together now and work toward a better future.