This article was first published by the Environmental Defense Fund, an organization focusing on creating economical policies to support clean air and water; abundant fish and wildlife; and a stable climate. The article was authored by Monika von Hillebrandt and originally appeared here.

Power outages are a way of life where I grew up.

Any time a rainstorm rolled in — they often do in the tropics — we knew our house would likely lose power, for hours or maybe days.

My father would frantically worry about all of our appliances getting ruined, while my mother would scramble to make sure our refrigerated food wouldn’t spoil.

Just the way things are, for everyone

Like so many Puerto Rico residents, we always had emergency flash lights in every room. My sisters and I would invent games that didn’t require electricity to keep ourselves entertained while waiting for school to open back up, or to just make time pass by.

No matter where you live in Puerto Rico, this is just the way things are for most people. So watching what’s happening on the island now, I’m excited that local towns may soon have their own local electricity systems, and that there’s a plan to power the whole island with renewable energy within a few decades.

Puerto Ricans have been waiting for reliable, clean power for a long time and they truly deserve it.

We had “hurricane days” off from school

When I grew up, there were times when it wasn’t safe to drive to school after a storm because traffic lights were out and debris littered the road. Or when we had to stay home because we knew the school would lose power. 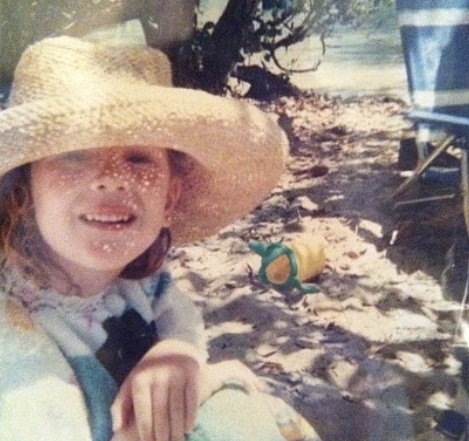 I was four in this photo taken on a Puerto Rico beach.

Instead of having “snow days” like people do here in the Washington, D.C., region, we had “tropical storm days” or “hurricane days.”

Puerto Rico power plants are older than those on the mainland, and the power grid has been poorly managed for decades. As a kid, I heard my parents and grandparents share their frustrations with the system; many island residents do.

And because electricity must travel from the southern part of the island, where the power plants are located, to the north where most people live, all it takes is a tropical storm and some downed trees —  and power is knocked out, sometimes for days on end.

In 1998, when I was six, Category 4 Hurricane Georges made landfall in Puerto Rico. Before this storm, it was common for big businesses and commercial centers to have generators, but less so for small businesses or residential homes like the one I lived in with my parents and two sisters.

We were without power for three weeks. It was after this hurricane that most Puerto Ricans, regardless of their social or economic background, began to invest in generators.

My parents eventually bought one, too, and it was a great relief for the next years to come. We knew that any time the power went out, we’d at least have a temporary back-up.

But then came Hurricane Maria and everything changed.

My parents “only” lost power for 84 days

In September 2017, Hurricane Maria, a Category 5, slammed Puerto Rico. Although I moved to the mainland in 2015, most of my family and loved ones are still on the island. Thinking about my beautiful and beloved island experiencing so much destruction and continued suffering still makes me upset at times.

For the first few weeks after the storm hit, my parents would have to drive around to find a spot with mobile reception so we could connect. Although our conversations were often broken off after a few minutes, they depended on me for updates on relief efforts from the mainland.

I learned that some people were waiting up to 10 hours to get gas for their generators, or to buy basic necessities like food and water.

My parents, who live in the San Juan metropolitan area, were left without electricity for 84 days and were among the lucky ones to have service restored first. By then, they had spent thousands of dollars on gas for their generator, even though they used it as little as possible.

We all cried with joy and relief on the phone when they told me the power was back.

Light at the end of the tunnel?

Despite all the tragedy that ensued after Hurricane Maria, I’m optimistic about where Puerto Rico’s energy future can go.

While generators are what got many people through the last couple of years, they’re not a solution to Puerto Rico’s chronic energy issues. Nor can we stop hurricanes from hitting our island.

This is why the plans to build microgrids and to find new and cleaner energy sources for Puerto Rico gives me so much hope. I could not be more proud to be a part of an organization that sees the value in pushing for such solutions.

Image courtesy of Flickr. Originally published by S&S on April 30, 2019.