Editor’s Note: This article was first published by the Environmental Defense Fund, an organization focusing on creating economical policies to support clean air and water; abundant fish and wildlife; and a stable climate. The article was authored by Fred Krupp, President of EDF, and originally appeared here.

This was first published in the New York Daily News.

It will seem like an impossible fantasy to those who only know the politics of today: A Republican President signing a major environmental bill, in the East Room of the White House, and receiving a standing ovation from the leaders of green groups. But it happened – I was there.

President George H.W. Bush knew the art of the deal. The solution he hammered out with Congress and environmental leaders in 1990 gave key interests what they needed to solve the contentious problem of acid rain pollution, which was devastating the lakes and forests of the northeast.

Environmentalists would see sulfur dioxide pollution from power plants cut in half and capped. And power plant owners would win flexibility to make the necessary cuts in the most economical ways they could find.

Soon, the built-in flexibility of the acid rain cap-and-trade program spurred innovations that produced the needed reductions ahead of schedule, at a fraction of the expected cost. Along with later steps, cap-and-trade has reduced sulfur dioxide emissions by more than 85 percent, saving hundreds of thousands of lives.

The Environmental Protection Agency estimates that the benefits outweigh the costs 40 to 1. It is one of President Bush’s great legacies, demonstrating what he said back in 1989: “A sound ecology and a strong economy are not mutually exclusive. They go hand in hand.” 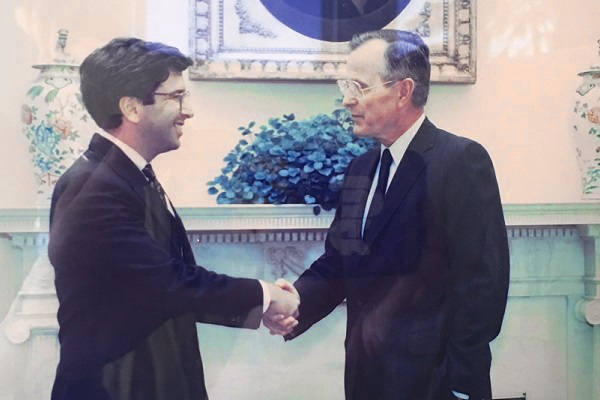 I had an opportunity to thank President Bush in person.

One of my proudest moments in decades of environmental work was to watch Bush sign the 1990 Clean Air Act and hear him commend Environmental Defense Fund and other groups “for bringing creativity to the table to end what could have been a hopeless stalemate.”

And that’s exactly what the President himself had done.

Two years later, he attended the Earth Summit in Rio de Janeiro, signing the United Nations Framework Convention on Climate Change, and getting that treaty ratified by Congress. With those actions, he helped the world take the initial steps to stabilize the climate.

Now, when we must find ways to reduce climate pollution dramatically and without needlessly burdensome costs, we would be wise to look to Bush’s prudent approach: choose flexible, performance-based policies that trigger a hunt for the lowest-cost solutions, both low-tech and high-tech.

Even today, the art of consensus has not been entirely lost. Just two years ago, almost every Republican in Congress voted for the Lautenberg bill, a strong new chemical safety act that was thoroughly bipartisan.

“All of us have been given a trust”

There’s a role for voluntary action, too, by individuals and companies and groups. President Bush often acknowledged and expressed gratitude for the many selfless contributions to our overall well-being, those unforgettable “thousand points of light.”

Yet he recognized that voluntary action alone is not sufficient. Only government can set the performance standards that harness the power of the market to drive progress. George H.W. Bush knew the difficulty of the environmental issues facing America and the world, but he was undaunted.

“We can reverse the errors of this generation,” he said, “mindful of the next. All of us have been given a trust, a trust that lies in the stewardship of our planet. In this, we must not fail.”