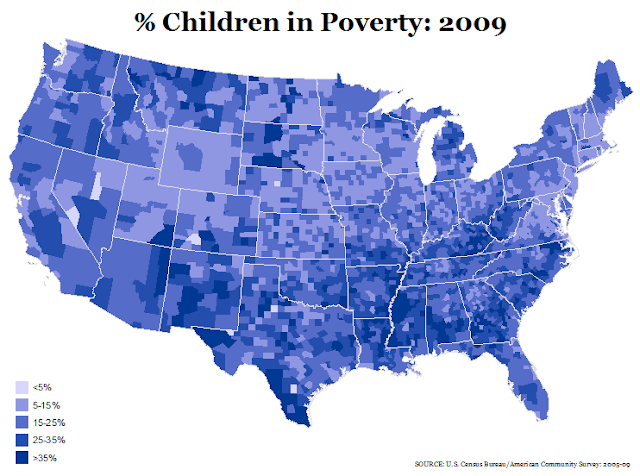 Today’s post is by Rakim Brooks, and is cross-listed with Demos’s Policy Shop. Rakim is the Ed Baker Fellow for Democratic Values at Demos, a Progressive think tank based in New York City. He is also a Doctoral student and a Rhodes Scholar at the University of Oxford. A graduate of Brown University, where he studied Africana Studies, Rakim’s main areas of research are political theory, history, and social justice.

Contrary to The New York Times‘ estimates that poverty rates would dwindle with the release of the Supplemental Poverty Measure (SPM), the Census Bureau is reporting that more than 49 million Americans are struggling to meet the costs of food, clothing, shelter, and utilities. Relative to the official measure, this includes an additional seven percent of the elderly, four percent fewer children, and two percent more of married households, among other increases. In all, the SPM suggests that 2.4 million Americans went uncounted by the traditional poverty measure, continuing a trend of underestimating the number of impoverished American families. In 2009, 2.4 million Americans also went uncounted.

The traditional measure undercounts relative to the SPM because of the different poverty thresholds each measure uses. In 2010, the traditional measure placed the poverty line for a two parent-two child household at $22,113, while the SPM set its threshold at $24,343. The reason for this difference is not arbitrary. In fact, the official threshold has been a source of consternation for poverty advocates for many years. The traditional poverty measure, also referred to as the Orshansky thresholds in honor of its creator, set the poverty rate at three times the cost of a minimum food diet in 1963, adjusted for inflation annually. That was just fine when food accounted for one-third of the average American family’s gross income.

Due to technological advances, food presently accounts for roughly one-eighth of a family’s income. Housing and childcare take now take the biggest bite out of a family’s paycheck. And as individuals age, healthcare becomes a more pressing financial concern. Yet, the current measure neglects to factor in any of these additional costs nor does it consider the most obvious factor in ascertaining true poverty rates: geography.

The SPM reveals the results of this undercounting. Politicians and pundits have long assumed that Social Security eradicated elderly poverty. True enough when compared to historic rates of elderly poverty, but our seniors are still struggling to get by. According to the SPM, roughly 16 percent of seniors are impoverished. That’s over six million seniors at present. Consider the reports of rising healthcare costs, we can expect this population to grow, presenting another significant social policy problem. Whereas families in previous generations could expect their elderly to be independent, our families will experience additional financial burdens as our elderly loved ones fail to make ends meet. And we will face this new burden with stagnating and declining wages.

The SPM also reveals a harsher reality concerning our immigrant families.  Roughly 25 percent of immigrant families, including 16.8 percent of naturalized citizens are poor. Conservatives have long bemoaned the so-called “drain” low-skilled immigrant workers place on our economy, but praised other hard-working immigrants for their ingenuity and contributions to the American economy. They have cited official poverty rates of 11.4 percent to buttress their view; even native-born rates of poverty are 14.3 percent, they say. Well, the SPM demonstrates that, while these naturalized citizens are performing better than their non-citizen peers (32 percent poverty), these new American citizens are also struggling to survive in our unequal society. And it’s not only the Hispanic naturalized citizens who are feeling the strain of this sputtering economy. 16.7 percent of Asian immigrants are poor.

With those two under-estimates in mind, realize that this new Census report forecasts our collective future if we fail to respond to the poverty crisis now. As the baby-boomers continue to retire, our social and economic commitments are growing while our workforce is shrinking. The new American workforce, if immigration and birthrate patterns continue at current rates, will be composed largely of our Black and Hispanic youth, many of whom will bear the scars of poverty. Mixing an aging population and blighted workforce is a recipe for national failure. Let’s hope elected leaders and citizens alike are getting the message.