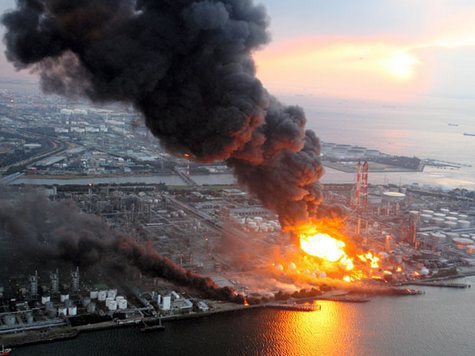 Today’s guest blog is written by Brian Krohn. Brian is currently a Research Fellow in the Bioproducts and Biosystems Engineering department at the University of Minnesota.  He completed a Master’s in Environmental Change and Management and a Master’s in History of Science, Technology and Medicine at Oxford University as a Rhodes Scholar.  A graduate of Augsburg College with a B.S. in Chemistry, Brian’s interest in renewable energy has spanned many topics in a number of capacities including: developing industrial catalysis for green fuels, synthesizing advanced biofuel products, GIS mapping for concentrated solar power, and studying life cycle impacts of CCS, wind, solar, nuclear and biofuels.

Images of Fukushima, Japan were in the minds of many when the unexpected earthquake in the eastern U.S. shook two nuclear power plants.  While all the safety systems at the east coast nuclear plants functioned properly and smoothly, the experience left many policymakers in nearby D.C. uneasy.

The nuclear disaster in Fukushima, which occurred in a democratic, technologically advanced country, has undermined confidence in nuclear power globally. Germany – a global leader in renewable energy – plans to close half of its nuclear power plants immediately and phase the remaining out by 2022.

Fukushima and the east coast quake also shook my own confidence in nuclear energy.  As an environmental scientist concerned about climate change, I fully supported any and all non-carbon based alternative fuel sources.  Fukushima changed my mind.

The lottery is a useful analogy. The odds of winning the lottery are extremely small — perhaps as small as the probability of a major nuclear disaster. But every year, someone wins the lottery.  A number of serious nuclear accidents have occurred in the last sixty years, including two — Chernobyl and now Fukushima — listed as category 7 incidents, the highest rating of nuclear disasters. The potential scale of a nuclear disaster is enormous: Fukushima displaced some 170,000 people, destabilized Japan’s electrical grid and contaminated the island’s food supply and environment.  Other energy sources, even offshore drilling, do not carry nearly the same destructive potential.

Another comparison to the lottery strikes at the heart of any nuclear debate.  Not everyone buys lottery tickets.  The low probability is simply not worth the effort for many people, no matter how great the reward.  The nuclear lottery holds the opposite relationship to risk: for many, the scale of a potential disaster is not worth the risk no matter how low the probability of a disaster.

Even though many countries are now putting their best engineers and scientists to work re-evaluating their nuclear power systems, at its heart, this is not a technical question.  Investing in nuclear power is ultimately a judgment based on a society’s tolerance to risk.  With nuclear energy, we must ask ourselves how long we are willing to buy lottery tickets for a disaster.