This article was first published by the Environmental Defense Fund, an organization focusing on creating economical policies to support clean air and water; abundant fish and wildlife; and a stable climate. The article was authored by Ryan Hamilton and originally appeared here.

There is a hopelessness to watching the rain fall onto your windowsill on a cold New York day while scrolling through news coverage of the country you love burning to the ground.

I left Australia for the U.S. three years ago. Seeing pictures of Australians fleeing their homes while carrying what few possessions they could grab… Watching videos of koalas and kangaroos frantically trying to escape the flames… Hearing from friends and family choking on smoke that had our capital, Canberra, rated as the worst city in the world for air quality…

All of these things can make me weep with despair.

More than 12 million acres — an area the size of Vermont and New Hampshire combined — have already burned. For comparison, approximately 2 million acres burned in the 2018 California wildfires — the worst in the state’s history.

We Aussies understand that our country is a land of contradictions.

Newcastle, the town where I grew up, is known for coal and nature. The town houses the world’s largest coal export port — but right next to it is a stretch of coastland that’s among the most pristine in the nation. 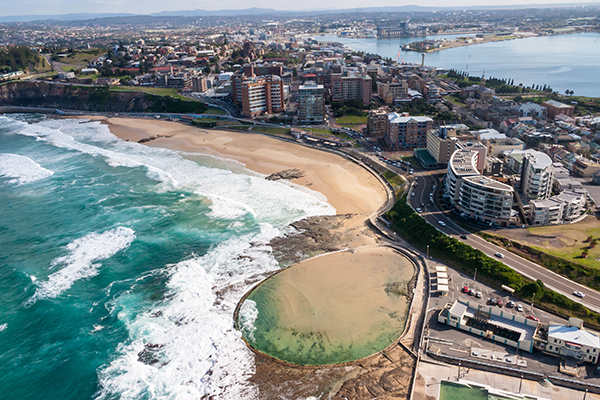 An aerial view of Newcastle, in New South Wales, Australia

That juxtaposition is at the heart of how Australians think about climate change.

For the last 120 years, since we became an independent nation at the turn of the 20th century, we have grown and prospered on the back of mining, processing and exporting nonrenewable resources like coal, iron ore and gas.

If we try to rely on these same economic drivers going forward, Australia as we know it will not survive.

The scientific warnings and the bumbling response

Our own scientific agencies have warned that climate change will hit Australia harder than the rest of the world, with a predicted temperature rise of up to 40 degrees Fahrenheit by 2090.

But to see the impact of climate change, we don’t need to look beyond today: 2019 was the hottest year on record in Australia, and just this week, temperatures in the suburbs of Sydney hit 120 degrees.

We have experienced the worst drought in recorded history. Right now, four of our six states are burning across unprecedented swaths of land.

Yet Prime Minister Scott Morrison and his government steadfastly refuse to acknowledge the relationship between climate and the safety of Australians.

Even as hundreds of thousands of our countrymen are fleeing bushfires that rise to heights greater than the Sydney Opera House, Morrison first took a vacation in Hawaii and then tried to turn the activation of the country’s military into a political opportunity.

This bumbling response is unfortunately not a shock. The Australian government ranks among the world’s worst in its response to the climate emergency.

It was singled out as a “regressive force” by an international comparative report in 2019 and it effectively snubbed the United Nations Climate Summit in New York earlier that year.

Back in 2017, Morrison brought a lump of coal (supplied by Australia’s leading coal lobbyists) onto the floor of the Parliament to make a cheap political point.

A new climate chapter for Australia

This current catastrophe could prove to be the beginning of a new chapter, as Australian’s silent majority finally rejects the politics of climate denial.

But not yet. Right now, we don’t really care about the politics.

We’re on fire. What we need now is help — and hope.

And that is what we are seeing.

We see it in the military reservists who canceled their summer holidays to evacuate residents onto naval warships to escape the fires.

We see it in stories of courage and heroism from our largely volunteer rural firefighters.

We see it in our brothers and sisters from across the ditch in New Zealand who have been on the ground for weeks fighting the fires.

We see it in the veteran Californian and Canadian firefighters jetting to Australia to do what they can to help.

Our nation is dry, thirsty and burning — and when this is all over, we will hold our government accountable for inaction.

It is then that I believe Australia’s new climate chapter will finally begin.

But for now, we have hope.

Image courtesy of Flickr. Originally published by S&S on January 9, 2020.