The days when business leaders could dodge social or political issues are coming to an end. CEO engagement on issues such as health care, sexual harassment, gun control and immigration have been steadily on the rise.

In a U.S. House committee meeting just last week, lawmakers “grilled [bank] executives more on social issues than business fundamentals,” according to Reuters, and probed them about fossil fuel investments.

And as a recent Axios Trends piece suggests, pressure on CEOs to address social issues is increasing ahead of the 2020 political campaigns. In particular, demands that they act on climate change are heating up.

More than 6,500 Amazon employees have signed a letter to their CEO Jeff Bezos and his board of directors, asking for broad action to fight climate change, with more workers adding their names daily.

This followed a move in late 2018 where Amazon employees, who are also shareholders, filed petitions asking the company to release a comprehensive plan on climate change. Amazon announced in February that it will, at last, disclose its carbon footprint later this year.

This latest letter to the Amazon CEO shows that employees are becoming a powerful advocate for business leadership on climate.

Investors and millennials weigh in

The investor community is increasingly recognizing that climate change poses a major risk to business performance – and is asking companies to act now.

Environmental issues, mostly focused on climate change, and demand for corporate disclosure on lobbying and election spending, now make up 46% of this year’s shareholder resolution proposals. 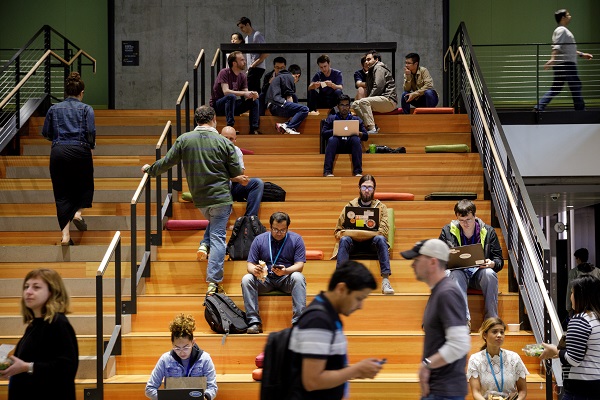 Many young workers, like these at Amazon’s headquarters in Seattle, want their employer to have a strong environmental agenda. Photo: Amazon

At the same time, a groundbreaking survey earlier this year found that nearly 40% of millennials, who will represent one in three workers by 2020, have chosen a job because of its approach to corporate sustainability. This young workforce expects employers to have a strong environmental agenda, and want CEOs to take a leadership role.

As BlackRock CEO Larry Fink wrote in his annual letter to executives, “contentious town halls” where employees speak up about the importance of corporate purpose are becoming a fact of life.

“This phenomenon will only grow,” Fink predicted, “as millennials and even younger generations occupy increasingly senior positions in business.”

No company is immune to the pressure

In other words, it’s no longer enough to post values on a company intranet. Executives need to publicly and visibly put them to work.

It still remains to be seen if oil companies’ actions will match their rhetoric, but these developments show a remarkable shift in social and environmental pressure on CEOs.

How CEOs can navigate it all

With pressure mounting on corporate America to wield its influence to address climate change, more businesses need to get off the sidelines and take charge. It’s not just the planet that demands action; every business stakeholder does.

Ready to take a stand? Here’s how companies lead.

Here’s a roadmap for how to get started:

1. Commit to corporate sustainability leadership. Deciding to take action and setting science-based climate goals are the first key steps in any company’s sustainability journey. Many companies lack the resources or expertise to get started, but programs like Climate Corps help companies set – and meet – climate and energy goals.

2. Collaborate for scale and impact. Partnering across industries and supply chains, and with nonprofits, can lead to transformative change. The urgency of the climate challenge has shifted the needle toward crowdsourcing for sustainability solutions, and connecting uncommon bedfellows.

3. Advocate for smart environmental policy. Only public policy can deliver the emissions reductions necessary to avoid the worst impacts of climate change. Business voices matter in the climate debate – and lawmakers need to hear  them. That’s why four major food brands – Nestlé, Danone, Mars and Unilever – just backed a price on carbon.

4. Accelerate environmental innovation. The same technologies that are changing the way we work and live can change the way protect the planet. These “Fourth Wave” innovations have the potential not just to unlock trillions in value but also to supercharge sustainability efforts.

Image courtesy of Flickr. Originally published by S&S on April 23, 2019.