Editor’s Note: This article was first published by the Environmental Defense Fund,  an organization focusing on creating economical policies to support clean air and water; abundant fish and wildlife; and a stable climate. The article was authored by Timothy O’Connor and originally appeared here.

With 17 million Americans living within a mile of an active oil or gas well, dangerous leaks that add climate pollution and contribute to local health problems are on many people’s minds. But there’s an invention waiting to be scaled up that could help them sleep a little easier: Small, unassuming digital monitors at or adjacent to nearby oil and gas sites that pick up air pollution problems in real time.

Concerns over cost and reliability have hindered widespread deployment of these solutions, but that is changing fast. Recent breakthroughs in real-time monitoring technology have pushed down costs to the point where oil and gas companies can now ramp up continuous, local monitoring of air quality around their facilities.

Not only will these monitors keep communities safer, they will also encourage industry to minimize dangerous leaks and catch problems before they turn into a major health hazard and liability.

With better data, neighboring communities can engage and better protect themselves from pollution, governments can regulate more effectively, and industries can fix problems faster.

A golden state for oil wells and cutting-edge technology

The risks of living near unchecked oil and gas sites became visibly clear to the world when the massive leak at the Aliso Canyon natural gas storage facility in 2015 forced thousands from their homes and sent countless others to seek medical treatment for extreme headaches, nausea and nosebleeds.

The disaster wreaked havoc on the L.A. community and spurred tremendous community backlash, clean-up costs and liability problems for the company responsible for the event.

But Aliso Canyon was also a catalyst for change.

The beginning of a mass market for pollution monitors?

At the same time, collaborations such as the Methane Detectors Challenge and a mobile monitoring project with Stanford University have helped spur monitoring technology development for even more applications in California and beyond. 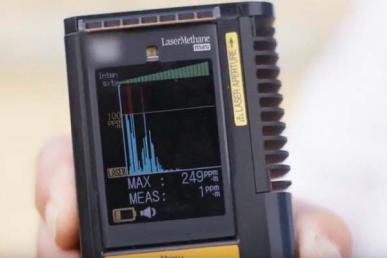 A handheld monitor measures emissions from a nearby oil field

Such innovations partially build on existing technology that has been commercially available and in use by other sectors for some time. It means that monitoring at and near oil and gas production sites can be ramped up relatively quickly nationwide if and when there is an initiative to do so.

With investors increasingly looking at risks associated with leaking oil and gas sites, pressure is also building on industry to address these problems. Large producers such as Shell and Statoil are now testing emissions monitoring systems at some of their facilities.

The investor-owned utility Pacific Gas and Electric Co., which has used monitors to manage equipment for natural gas delivery pipelines for years, has also been demonstrating to other companies how the technology brings value to its operations.

Our analysis – paired with the fact that California is already starting the process of standardizing the technology – makes it clear that time is ripe for real-time monitoring that will keep communities nationwide healthier as we transition to a cleaner energy economy.

And that spells opportunity for entrepreneurs wanting to tap into this emerging and exciting technology.