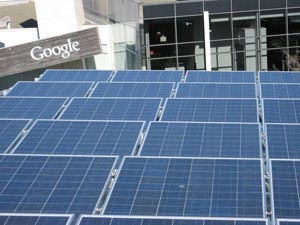 These strategic moves come even while Google has shut down the “RE<C” project it began in 2007. The goal of RE<C was to support research and development for renewable electricity sources that are cheaper than coal.

Although Google noted that “other institutions are better positioned than Google to take this research to the next level,” they shuttered their project to some extent because others have already lowered the cost of renewables so much. As Google’s RE<C team wrote in its announcement,

Google had focused on new solar thermal, solar mirrors, and power tower projects—but the cost of traditional solar photovoltaics fell so much in the past few years that research into these alternatives is no longer as necessary.

Google’s recent moves are indicative of a larger trend. We’ve moved from a world in which these technologies require further extensive research to a world in which they can be implemented, profitably, right now. Google plans to profit from all of its clean tech investments. They’re not unusual in this regard: 75% of large international corporations plan to increase or significantly increase their clean tech investments this year.

Even while dropping its high-profile RE<C initiative, Google is investing more than ever in renewables. But it’s choosing deployment over R&D — showing once again that much of the progress in climate solutions will come from actually developing projects. …