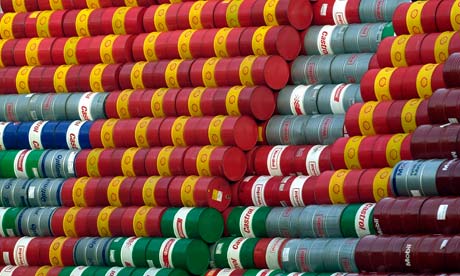 Eric A. Lukas is Sense and Sustainability’s Outreach Director for Transportation Policy and Conventional Energy Markets.  Eric recently completed a master’s degree in International Relations at Oxford University, where he was a Jarvis Doctorow Scholar.  He was previously a contributing editor to the Oil and Glory blog at Foreign Policy magazine and Managing Editor of the Columbia Political Review.

Markets for commodities—the raw materials, from oil to cotton to wheat, on which our everyday lives depend—can be naturally volatile. A drought in a major wheat producer can send grain prices soaring, while political unrest in the Middle East usually touches off a spike in the price of crude oil. Volatility in a number of commodities, however, has increased significantly within the last decade (this trend is vividly illustrated by the following charts from the International Monetary Fund), with oil, wheat, and copper, among others, reaching record prices in the last three years. Financial speculation has been the most popular target for blame, and curbing commodity price volatility has become a cause célèbre among advocates of financial reform. Calls for the greater regulation of commodity-linked securities came to fruition on October 18, when the U.S. Commodity Futures Trading Commission (CFTC) unveiled a sweeping series of rules designed to bring order to the vast pools of capital trading in commodity futures and derivatives.

Implemented as part of the broader Dodd-Frank package of financial reforms, the CFTC rules are several months in the making and represent a significant expansion of the regulator’s authority. As reported by the Financial Times, the commission will implement “position limits,” which restrict the amount of contracts a single trader can hold to 25 percent of the deliverable physical supply for that commodity. In a further step known as “aggregating accounts,” these limits will apply to traders holding similar trading positions in a single commodity across multiple accounts, treating the common trading strategy as if it were in a single account. The trading limits are expected to take hold for the traded futures and derivatives contracts of 28 commodities, including crude oil, gasoline, wheat, corn, soybeans, and cotton.

Also as part of the new rules, the CFTC’s regulatory oversight would extend from the $40 trillion market for futures contracts (tradable contracts to buy or sell particular commodities at a set price at a future date) to the much larger, opaque, and hitherto unregulated market for derivatives (securities derived from an underlying asset), which has been estimated at $300 trillion. As with futures contracts, the CFTC will impose trading limits in commodity-linked derivatives, which are often used by companies buying raw materials as a hedge against an unexpected change in commodity prices.

The CFTC commission members supporting the new rules—the narrow 3 to 2 vote was split along party lines, with Democratic commissioners in favor and Republican commissioners opposed—hailed them as a victory for transparency, market stability, and the consumer by curbing the threat of “excessive speculation” in commodities. Dissenting members and many financial industry groups, by contrast, have argued that rules such as position limits will increase the costs of hedging the risks of commodity volatility without tackling the root causes of that volatility. Which side is right?

It all depends on the extent to which you attribute the recent rise in commodity price volatility to financial speculation, which has proved to be a very contentious topic. The idea is that as speculators buy and sell increasingly larger amounts of commodity futures and derivatives, commodity prices will rise and fall further than they would if they followed the fundamentals of supply and demand, thereby increasing volatility. The curbing-speculators argument has attracted a number of prominent supporters; back in March, CFTC Commissioner Bart Chilton cited economists Jeffrey Sachs of Columbia University and Nouriel Roubini of New York University, among others, to support the CFTC’s new rules (for those with further interest, Stanford economist Kenneth Singleton also published a high-profile paper this past summer noting the positive correlation between investor flows and the 2008 volatility in the oil market). On the other side of the debate are energy markets expert Craig Pirrong at the University of Houston and the International Energy Agency, both of whom have argued that the recent market volatility for oil and other commodities has stemmed from changing supply and demand dynamics. In a 2010 Cato Institute article, Pirrong also objected to the proposed CFTC position limits, arguing that the limits will “constrain the derivative markets’ most important functions: risk transfer and price discovery.”

Whichever side of the argument you may fall, the increase in financial speculation in commodity markets cannot be ignored. In the early 2000s, financial instruments linked to commodities known as exchange-traded funds or ETFs—which track the price of a specific commodity or basket of commodities—began to attract interest from investors seeking higher returns than they could find in the stock market. Over the next five years, investor participation in such instruments mushroomed from $15 billion in 2003 to over $200 billion in 2008. As this excellent chart from the Financial Times shows, investor involvement in commodities is now around $450 billion, and those speculating in commodity-linked securities have come to include large institutional investors such as university endowments and pension funds as well as individual investors of all sizes. With so much new capital flowing into commodity markets, argue economists Ke Tang and Wei Xiong, increased speculation has opened “a channel to spill over volatility from outside to commodities markets and across different commodities.”

At the same time, the fundamental forces of supply and demand have played a major role in driving commodity prices to new highs. The rapid growth of emerging economies such as China, India, and Brazil over the last decade has led to increasing demand from these countries for food and fuel. That rising demand also occurred at a time when crude oil and metals such as copper were becoming increasingly expensive to extract, leading to higher prices for not only oil and metals but wheat and soybeans as well (agricultural commodities prices generally track oil prices).*

Maybe, however, the rise in commodity prices and volatility is a product of both factors. That’s the argument of Brad Plumer on The Washington Post’s Wonkblog. Plumer cites an October 2011 report from the St. Louis Federal Reserve (the abstract is here and the full text here) which found that the 2004-2008 rise in crude oil prices was primarily due to supply and demand factors. According to the report’s authors, these market fundamentals accounted for an estimated 44 percent of oil price fluctuation during that period. But the St. Louis Fed also found financial speculation in oil to account for 15 percent of price fluctuation. Taking these numbers into account, it’s important to consider that many investors have been attracted to commodity-linked securities such as ETFs as a bet on the future growth of emerging economies, which they believe, in turn, will lead to higher future commodity prices. It is this cycle of positive expectations that can cause the prices of commodity futures contracts to shoot to levels above and beyond what may have been the case had these prices exclusively followed market fundamentals. While that 15 percent of oil price fluctuation attributed by the St. Louis Fed to speculation may not be a large number, as Plumer writes, “it’s still pretty significant.”

A regulatory pathway to stable development?

Whether the CFTC rule changes will be helpful or ineffective in stemming commodity price volatility, their effects could be felt far outside Washington and the trading floors of New York and Chicago. In many cases, the prices of commodities traded in U.S. futures and derivatives markets form a benchmark for the worldwide prices of food, fuel, and metals. Commodities quite literally move the world, and ensuring that their prices remain stable has an impact on the well-being of billions of people. When wheat and soybean prices reached record highs in 2007 and 2008, riots erupted around the world, especially in developing countries in Asia and Africa. As food prices surged again in late 2010, the sense of anger in large grain-importing nations in the Middle East may have helped touch off the Arab Spring, according to global health expert Laurie Garrett. If the CFTC’s new regulations succeed in helping to mitigate volatile commodity prices, the result may also go some way towards stabilizing political and economic development worldwide.

*Author’s note: For those with a further interest in commodity price volatility, I highly recommend the following two pieces on food prices and oil prices by Toni Johnson of the Council on Foreign Relations as primers.