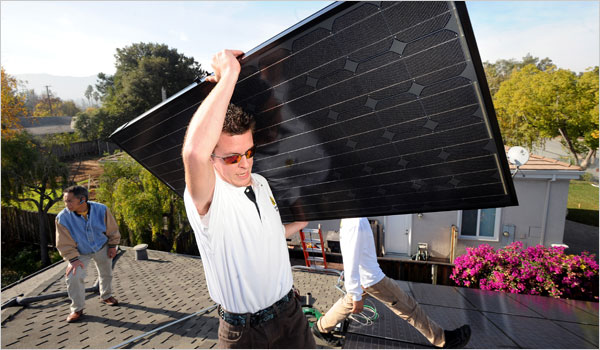 If you’re losing your optimism from the recent economic news, there’s one good way to restore your faith: start reading about clean tech.

It might get lost in the midst of Congressional squabbling, but U.S. Energy Secretary Steven Chu is still diligently working to support clean energy businesses around the country.  His Department of Energy recently provided a partial guarantee of a $1.4 billion loan to NRG Energy’s Project Amp, which aims to nearly double the amount of solar power installed in the nation. Since the construction jobs are necessarily local, and over 90% of the solar panel components will be domestically sourced, the project should create roughly 1,000 jobs while powering 88,000 homes.

The NRG Energy investments would result in the second recent doubling of solar capacity — American installed solar capacity had already increased by 102%  from 2009 to 2010. Note that this is one of the few industries where growing at 102% means you lose market share: growth in solar worldwide was at 130%. But the U.S. is expected to keep this pace while the rest of the world slows down.

This growth in solar is, remarkably, mostly led by the private sector. The D.O.E. involvements are usually loan guarantees, not direct funding, and the “solar financing tsunami” is predominantly coming from banks, venture capitalists, and firms like Google. The announced funding adds up to over $10 billion in the last few months alone.

No wonder the industry has seen such explosive job growth. According to Brookings, the clean energy sector has been growing at 8.3% from 2003 to 2010, or nearly double the overall economic growth of that period. As Joe Romm points out,

The median salaries for cleantech-related jobs are $46,343, or about $7,727 more than the median wages across the broader economy.

Romm also does an excellent breakdown of how the New York Times and some other media outlets have misstated the facts and misunderstood the conclusions of recent clean tech job growth studies.

In a time of economic stagnation, it’s exciting to have so much optimism for the industry that is increasingly determining our century’s legacy.